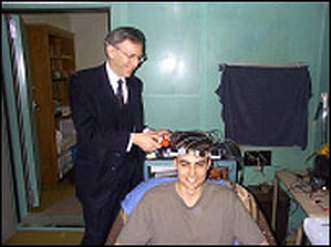 The neuromagnetics research of neuropsychologist Dr. Michael Persinger is given a cursory review in regard to Temporal Lobe Transients (TLTs) which are implicated as miniseizures in producing a variety of perceptual anomalies combined with a sense of deep meaning.

Persinger identifies the temporal lobes as the biological basis of the God Experience, "the God Module," in his 1987 book Neuropsychological Bases of God Beliefs.

He comments on the purpose of his research: "As a human being, I am concerned about the illusionary explanations for human consciousness and the future of human existence.  Consequently after writing [NBGB], I began the systematic application of complex electromagnetic fields to discern the patterns that will induce experiences (sensed presence) that are attributed to the myriad of ego-alien intrusions which range from gods to aliens.  The research is not to demean anyone's religious/mystical experience but instead to determine which portions of the brain or its electromagnetic patterns generate the experience.  Two thousand years of philosophy have taught us that attempting to prove or disprove realities may never have discrete verbal (linguistic) solutions because of the limitation of this measurement.  The research has been encouraged by the historical fact that most wars and group degradations are coupled implicitly to god beliefs and to the presumption that those who do not believe the same as the experient are somehow less human and hence expendable.  Although these egocentric propensities may have had adaptive significance, their utility for the species' future may be questionable."

His technique, using solenoids in a helmet for input, is fairly simple.  A hand-held computer programs the predefined pattern at which the fields will fluctuate. The impulses move through the temporal lobe and penetrate deep into the brain, where they interfere and interact with the complex electrical patterns of the subject's neural fields. The new patterns spread through the limbic system, producing sensations that range from subtle to profound.

Persinger's research goal is to use his device to trigger transcendental experiences in nonreligious people faced with the fear of death. Persinger has tickled the temporal lobes of around a 1000 people and has concluded, among other things, that different subjects label this ghostly perception with the names that their cultures have trained them to use -- Elijah, Jesus, the Virgin Mary, Mohammed, the Sky Spirit.  Some subjects have emerged with Freudian interpretations - describing the presence as one's grandfather, for instance - while others, agnostics with more than a passing faith in UFOs, tell something that sounds more like a standard alien-abduction story.

Persinger has discovered that when he aims for the amygdala, his subjects experience sexual arousal. When he focuses the solenoids on the right hemisphere of their temporal lobes, they sense on the left side of their body a negative presence -- an alien or a devil, say. When he switches to left left hemisphere, his subjects sense a benevolent force: an angel or a god. Focused on the hippocampus, the personal electromagnetic relaxation device will produce the sort of opiate effects that Ecstasy does today. So far, subjects report no adverse side effects. However, "if you interfere with the opiate pattern, people get very irritated," Persinger says. In fact, "they'll actually cuss you out."

Persinger asserts that, "God Experiences are products of the human brain.  When certain portions of the brain are stimulated, God Experiences, tempered by the person's learning history, are evoked.  They appear to have emerged within the human species as a means of dealing with the expanded capacity to anticipate aversive events.  God Experiences contain common themes of "knowing," forced thinking, inner voices, familiarity, and sensations of uplifting movements."  God Concepts are determined by verbal conditioning; perceptions are constructions.  When multiple events occur within a week, they are usually given special labels, such as "revelations," "communions," or "conversions."

People with TLTs experience vivid landscapes or perceive forms of living things.  Some of these entities are not humans, but are described as little men, glowing forms, or bright, shining sources.  The modality of the experience, that is, whether it is experienced as a sound, a smell, a scene (vision), or an intense feeling, reflects the area of the electrical instability.  The experiences, whether visual or auditory, may have actually happened or they may be mixtures of fantasy and reality.  Sometimes they may be fixed in space and time, while in other cases they may be as dynamic as everyday experiences.  However, whether they are dreamlike or vivid, they are experienced as real.

Persinger is not saying that the experiences of God are synonymous with temporal lobe epilepsy.  However,  when vast depolarizing waves spread across millions of cells, all types of memories and fantasies are mixed and mashed together.  But the God Experience is a normal and more organized pattern of temporal lobe activity, precipitated by subtle psychological factors such as personal stress, loss, and anticipated death. The gut feeling is a sense of familiarity, deep meaning, conviction and importance, even euphoria or mania (alternately fear and terror).  The brain's chemical reaction is to release natural opiates and other mood elevating neurotransmitters.

During TLTs, the person peers into another realm which has many names, heaven, the world of spirits, or the other dimension.  Trained meditators, (employing rhythmic stimulus to the CNS such as a mantra or "emptying", changes in oxygen and blood sugar levels), can drive the temporal lobe into bouts of theta activity.  Sometimes frank electrical seizures occur and the God Experience is reported.

Neuroscientist Todd Murphy, www.jps.net/brainsci/, has done a good job of summarizing Persinger's research in simpler language.  He describes consciousness as a feedback interface of sensory and cognitive modalities.  Low intensity magnetic fields orchestrate communication between lobes of the brain, at a speed much faster than the bioelectrical or biochemical process of neurons.  Different signals produce different phenomena.

The temporal lobes are the parts of the brain that mediate states of consciousness. Multiple modalities are experienced simultaneously, with the implication that they are 'reset' all at once by neuromagnetic signals which come in pairs, running slightly out of phase with one another.  In this way, neuromagnetic signals, like the two laser beams used to produce a hologram, might be able to store information.  The speeds at which neuromagnetic signals are propagated and their capacity to recruit/alter multiple modalities suggests that they were naturally selected to make instant choices to alter states of consciousness, and to do so quickly to facilitate adaptive behavior.

Murphy's many articles include not only the production of consciousness and states of consciousness, the God experience, but deja vu, and the spiritual personality.  Long-term memory is seated in the surface of the bottom of the temporal lobes in the para hippocampal cortex, closely connected to the hippocampus.  Usually, there is seamless integration of past, present and future.  We experience something in the present, compare it to the past and decide how to respond in a few seconds.

Nothing we experience seems to have anything to do with the past.  If these experiences spill over into the amygdala they are highly emotional.  If goes to the right it is unpleasant or fearful, to the left from ecstatic to beatific.  Another experiential phenomenon is time distortion. Murphy describes the phenomenon of the Sensed Presence and how it emerges from out of phase processes in different hemispheres of the brain.

He also relates the sensed presence with the behavior and feelings of romantic love. The 'self' is what we experience when a specific pattern of brain activity is happening.  It is linked to the Forty Hertz Component which appears from the temporal lobes, and two of it's deeper structures, the amygdala and the hippocampus.  The 40 Hz signal is only not there in dreamless sleep.

The maintenance of the sense of self is repeated 40 times per second and each time it can manifest a new emotional response to changing circumstances every 25 milliseconds. These structures on both sides of the brain yield two 'selves,' two senses of self.  One is on the left, and one on the right, but they are not equals.  The left-sided sense of self is dominant in most people; right side subordinate non-verbal, introspective.  The left is the one where language happens, maintaining our stream of inner words and thoughts about everything we experience or can imagine.

Each normal brain function involves a primary operative area on one side with a subordinate homologous or corresponding area on the other.  On the other side of the brain, following the rule that each thing on one side of the brain does the opposite of what the same thing on the other side does, we get the conclusion that there is a non-linguistic sense of self on the right side of the brain.  Usually the two selves work in tandem.  But if the two fall out of phase, and the left-sided self manifests by itself, we experience our own, right-sided silent sense of self coming out where the left sided sense of self experiences it as "other," as not-self.  This leads to the phenomenon of Sensed Presence, actually the Silent Self.

Electrical activity in the amygdala, hippocampus and temporal can 'spill over' into nearby structures.  If it ignites the visual area, intense visions of an entity of some sort emerge (left amygdala-positive imagery; right side-negative images/entities).  Kindling the olfactory region leads to unique scents; the somatosensory stimulation leads to buzzing, energetic, or tingly sensations or perceptions of being lifted or floating; language center activation produces voices, music or noise; long-term memory (lower portion of temporal lobes) access yields interactive virtual realities, complete with emotions, much like waking dreams.

The thalamus is implicated in aura vision, and the reticular activating system in life reviews. Because positive thoughts (involving the right hippocampus), and positive feelings (involving the left amygdala) are on opposite sides of the brain, prayer or meditation changes the balance of activity on the two sides.  These structures have some of the lowest firing thresholds in the brain and are thus likely to mismatch their metabolic rates of activity.

Whenever that's happening, chances of the activity of the two sides falling out of phase with each other increases. Then the 'right self' is experienced as an external presence. Sensed presence experiences become more common until the day arrives when God's presence is something the person feels at all times.

In mystical experience language fails, and a person's sense of themselves can be transformed.  Since we can't experience two senses of self, one is projected as other, the Beloved, either romantic or spiritual.  There is thus some truth to the saying that the beloved is God, and that when we love God we are loving ourselves.  I and Thou are One.  The other becomes the Self.